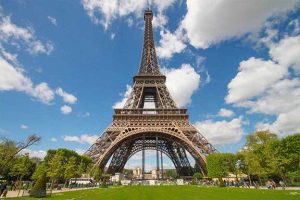 One of the most unusual composers working today is Joseph Bertolozzi. He has created two acclaimed albums of music solely using from sounds produced with two major structures: The Mid Hudson Bridge in Poughkeepsie, NY and the Eiffel Tower in Paris, France. He did it by using mallets and contact microphones to develop gamelan-like percussion sounds derived from those two large structures. The results are striking and can be heard in his two CDs “Bridge Music” and “Tower Music.”  Another artist who has used the sounds of a bridge is the Kansas City composer, Dwight Frizzel.  Rather than hit parts of his structure with mallets, he simply attached contact microphones a let the natural sound of the wind and traffic create sounds specific to the structure.

These ideas may seem esoteric and not have much relevance to audio advertising or sound design. But The Audio Penguin would suggest that kind of thinking is wrong. If you are trying to create a sonic environment for an ad (or for other content) then it could be very effective to use sounds from your local area. Kind of like eating from local farms.

And you don’t have to be a trained composer to get some interesting results. There are a number of sound composers who combine real soundscapes to create a soundscape collage. This movement took off in Canada in the 1970s and 1980s but now is practiced all over the world. There is a documentary aspect to this if actual sounds are used without processing them beyond recognition. There is also a music genre known as Musique concrète musique concrète in which everyday sounds are heavily processed and distorted to create very abstract music. But in this post I am suggesting that using actual recognizable local sounds to form ambient sonic environments can be a strong way to reach listeners in a given area.

If one is producing a radio spot or radio program for a local audience, it is easy to play and guitar or synth to provide a sonic background to speech. But that may make your spot sound like many others and lose the connection to a geographical area. Let’s say you are producing a spot for a hotel in an area known for its impressive waterfalls. Why not create a waterfall soundscape collage to serve as the background? This would be unique in comparison to just playing a canned music bed. And one does not have to be a trained composer like Joe Bertolozzi to do a credible job. After all, you are not creating a standalone musical composition but an environment for your spot. People will recognize the sound and associate it with the spot and your area in a way that a guitar track would not cut it.

With the availability of inexpensive very small flash memory sound recorders by such manufacturers as Tascam, Zoom, Roland, Sony, etc. one can go out and record documentary sounds easily. It is amazing how useful these are as most radio news reporters have found. To create the soundscape collage one simply needs sound editing and mixing programs. These are available for Mac and Windows in nearly all price ranges. I personally like to edit each sound clip in a simple two-track editing program before mixing in a larger multi-track program. For this basic editing one could use Audacity, a totally free program for Mac and Windows, though I usually use Sound Forge under Windows or Soundtrack Pro for Mac. You can also create the final sound collage with these simpler programs but I prefer some of the features of more advanced mixing software such as Acid Pro for Windows or Logic Pro for Mac. Many producers also use Avid Pro Tools on both platforms.

If you use local environmental sounds in an interesting way then let The Audio Penguin know. Email me at info@theaudiopenguin.flywheelsites.com. You might even be invited to be a guest blogger to discuss your ideas and even show off some of your work.