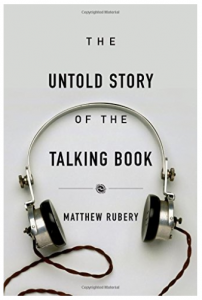 The Untold Story of the Talking Book

I thought I knew all about “talking books.”  When I was a child my mother was hired by a blind attorney in our neighborhood to come over and read to him.  Later I was aware that some radio stations provided a reading service for the blind, and blind people could qualify to receive special record players that played LP disks recorded at 16 2/3 RPM (half the normal speed used by music) and receive books recorded in that format.  An elderly woman I knew, who had once been a famous writer in Hungary, got books that way as her eyesight started to fade.  But these services were mostly for the sight handicapped and not available to the regular reader.  The technical quality could be somewhat marginal and some of the readers were volunteers, not professional voice talent.

The change from “talking books” being mostly for the sight handicapped to being a medium for the general “reading” public probably started with the invention of the Sony Walkman.  Someone could carry audio with them in the form of a fairly small (for the day) player, some cassette tapes small enough to put in a pocket, and a pair of headphones.  Cars were delivered with cassette players built in which permitted listening to an audiobook while driving.  Publishers hired professional narrators to read books though sometimes it was the author himself or herself. This became a niche market way overshadowed, of course, by the volume of recorded music being produced.

Then of course the cassette was replaced by the  CD then by compressed audio files via iTunes loaded onto an iPod. If you think that is the “complete” history of the “talking book,” as I once did, then you are very wrong!

Matthew Rubery’s book The Untold Story of the Talking Book delves deeply and fascinatingly into the history of what we now call “audiobooks.”  His approach is more sociological than technical.  He does not dwell completely on the technologies involved in the development of the modern audiobook, but especially upon the social and aesthetic considerations of recorded books.  Questions he explores include whether someone who listens to an audiobook has really “read” the book or whether listening is a kind of cheating.  He compares early cultures where all literature was oral (the culture of Homer, for example) to the post-printing-press culture of reading to oneself.

But what is also fascinating is his discussion of the history of recorded books. It starts way before long play records.  He points out the Edison envisioned his recording device used for recorded books almost immediately after he shouted “Mary had a little lamb” into the early prototype of his invention.  He wanted to record the works of Charles Dickens even though the world would have to wait decades for the technology be sophisticated enough.  If you think the person player is a new concept, writers in 1883 and 1885 even envisioned owning a cylinder player so small it could be worn under one’s hat in order to listen to recorded books anywhere.

I was married to a poet for a while and we had discussions about poetry as an aural form as it was in the days of Homer and compared it to modern poetry that is often something individuals read in print to themselves —  a different experience from aural presentation.  I attended poetry readings and did often wonder whether some modern poems are really that suited to hearing but are better comprehended by reading the text in print.

Rubery does talk about styles of text reading, from declamatory, ordinary narrative, and interpretive reading, often including multiple dialects and forms of expression, by professional actors and narrators.

Lest you think my summary has covered the gist of his book it has not.  The history and sociology of recorded texts is much richer and more interesting than I realized before exploring this book.  To make the journey more understandable, Mr. Rubery has provided a long introduction, 25 pages, that outlines the overall structure of his work which is broken out in fascinating detail in the rest of the book.

Matthew Rubery is a Reader in English Literature in the School of Englist and Drama at Queen Mary University of London.  His prose is on the scholarly side, meaning it is detailed and appropriately footnoted, but fortunately lacks the use of much scholarly “jargon” found in some other books by academics.  This book is designed to be savored, not rushed through.  But what a fun and enlightening experience!

So far the book seems to be published in hardcover form and as an audiobook.  What is unusual is the two versions, at least on Amazon as I write this, are the same price. In addition to the print version  I purchased a copy of the audiobook format as well to give to a colleague who has developed serious eyesight problems as he has grown older.  It is refreshing to have the audiobook the same price as the hardcover.  I do like listening to audiobooks, especially while taking the train back and forth from New York City to the upstate New York city of Poughkeepsie, where I live.  There are so many books, however, I have avoided in audio form as the hardcover might be $28, the softcover $18 and the audio version $39.  The current price of both the audio and hard cover versions of The Untold Story of the Talking Book is $29.95.  Very reasonable in today’s marketplace.

I cannot recommend this book too highly.  It is a book I will savor and return to again and again. As both a consumer and producer of audiobooks I suppose it has a special place in my life, but I think most anyone interested in the broad history of audio text productions and their influence on life and culture would also be captivated by this book.