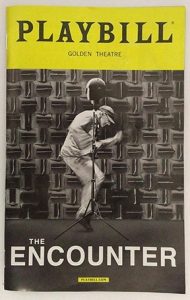 a kind of review of one of the most striking performances on Broadway in terms of sound design and the function of sound in a theatre performance.  The play is The Encounter, currently ending a 16-week run at The Golden Theatre in NYC. The Broadway show is not the first run for the play and it may still play other cities and countries.

Although the purpose of this post is to review the unusual sound design for this production, the function of sound design is to enhance the purpose and meaning of a performance.  Thus I do want to comment on the story itself.

The Encounter is based on the experiences of Loran McIntyre, a photographer who got lost in the Brazilian Amazon rain forest in 1969 while locating the Mayaruna people.  He wound up staying with, and traveling with, the Mayaruna even though there was no common language between them.  He did come to believe that the chief of the tribe could communicate telepathically but without language.  McIntyre’s experiences also formed the basis of a novel, Amazon Beaming, written by Petru Popescu and published in 1991.  The creator of The Encounter, Simon McBurney, based his one-person show on these sources as well as his own experiences visiting, more recently, the Mayaruna people himself.

In my work as a communications professor I studied the work of Edmund Carpenter, Marshall McLuhan and Walter Ong (and met two of the three personally), who wrote about the ways in which cultures that are mostly oral (little or no written language) have a totally different way of thinking about time and space than literalte cultures.  McIntyre became acutely aware of this in his experiences and even came to wonder what it means to be conscious.  Simon McBurney tries to convey this alternative way of thinking by the use of binaural sound.

I need to explain what binaural sound is, and how it differs from stereo or “surround” sound.  Readers who already know this can skip the next two sections.

Human beings hear via sound striking a diaphragm in each of two ears.  This sound, as translated by the brain, has amazing perceptual properties.  Even a blind person can tell if a sound is coming from one side or the other, is in front or back of the listener, above or below.

We could capture the exact sonic experience of a person if we inserted tiny omnidirectional microphones into the ear, recorded the output of each mic then, for playback, fed the sound of each mic back only into the ear that recorded it.  For real accuracy each mic would have to be i 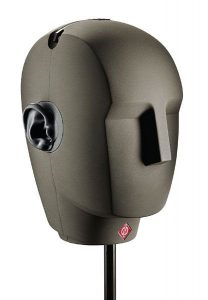 nside the ear as even the pinna, the large external part of the ear, affects the perception. Although this has been done, most binaural recording is done with a “dummy head,” an artificial head designed to mimic all of the characteristics of a human head, but with omnidirectional microphones, one in each ear.  Probably the most commonly used “dummy head” microphone used for this is the Sennheiser-Neumann KU-100 (pictured here).

If the resulting two audio channels are fed separately into the two ears of a human head, the sonic experience is amazingly realistic, just like experiencing the sound in person.  But that means the two channels cannot be played back through a traditional stereo system as, in stereophony, each ear can hear some of the sound from each speaker.  A few researchers, notably Ralph Glasgal of the Ambiophonics Institute and Dr. Edgar Choueiri of Princeton University, have created cross talk cancelled speaker systems that do allow a binaural recording to be played successfully through loudspeakers.  But such a setup would not work for sound playback in a large theatre as the effect can only be obtained in a very small “sweet spot” produced by the system.

Thus most people listen to binaural sound, as opposed to stereo, using headphones or ear buds.  The Encounter uses binaural sound to create an experience of sound coming from inside and around the listener’s head.  Each member of the audience was required to wear a headphone, in this case a lightweight but very high-quality headphone made also by Sennheiser.

BUT COULDN’T THE SAME EFFECT BE ACHIEVED WITH SURROUND SOUND?

Whereas binaural sound captures the listening experience at the ear, surround sound, and even stereo, tries to roughly duplicate the sonic environment that creates the sound. not the experience that the listener perceives.

Let’s consider how a listener would hear sound in a concert hall.  Musicians would be on stage performing on various instruments.  The direct sound would hit the listener’s ears as it traveled outward from the stage.  Some sound would travel outward to the walls and ceiling of the theatre and be reflected back to the listener from behind.  If a listener sat close to the front but on the left side and a soloist performed from the right, the listener would perceive the soloist correctly as coming from the right, as would listeners in other seats toward the front.  (Listeners sitting way back in the theatre may have such a strong mix of direct and reflected sound that it could be harder to locate specific sounds on the stage without visual cues.)

Now think about how a listener hearing a recording of that concert would hear it in a stereo playback at home or even in a theatre.  The reflected sounds would not be coming from the rear but would be mixed with the direct sounds since there would only be speakers in front of the listener.  A listener sitting in the “sweet spot” near the center, forming an equilateral triangle with the two speakers would still recognize instrument sounds as coming from the left, right, or center of the stage.  BUT, a listener sitting on the left, near the left speaker would not necessarily perceive the solo from the musician on the right as coming from the right.  There would be a tendency for the sound to “pull” to the speaker near the listener sitting on a side.

A typical surround sound setup, as used in many movie theatres and some home theatre systems, would at least have the reflected sound coming from speakers toward the rear of the listener, but the other characteristics would still be similar to stereo.  Accurate localization would require the listener to sit near the center “sweet spot”  (though it might be larger than for stereo as there would be three loudspeakers in the front: left, center and right.) The overall sound would still seem to be coming from the stage (a virtual stage if just a recording).

In binaural sound, using headphones, the localization is related more closely to the position of the listener.  A sound from the front will sound like it is in front of the listener. But sounds from an extreme left or extreme right position will not sound so much like they are coming from the sides of a stage but from the sides of the listener.  And a close sound recorded near the rear of the binaural “dummy head” mic will sound to the listener like it is close behind him or her.  This extreme localization is not possible with stereo or surround sound using speakers.  And in the binaural setup with headphones sounds can be positioned so they seem to be inside the listener’s head.

USING BINAURAL SOUND IN THE ENCOUNTER

The Encounter took advantage of the ability of binaural sound to locate sound very specifically in relation to the listener.

Simon McBurney performed some of the show around the binaural “dummy head” mic, though read other parts into mics toward the front of the stage.  When he was reading from McIntyre’s journals his voice was electronically pitch-shifted about an octave lower.  There were a number of recorded voices, from McBurney and several others, that were introduced into the binaural image at various times and, of course, many binaural natural sounds actually recorded in the Brazilian rain forest.  McBurney developed the piece in his living room and there were even “interruptions” from his young daughter asking for a bedtime snack. (This worked well and was not as cloying as one might expect.) The nature of binaural sound permitted the audience to “get inside” the head of McBurney of of Loren McIntyre as interpreted by McBurney.

Because the sounds were all presented in relationship to the listener, not the stage, each audience member was more immersed in the experiences of McIntyre and the culture of the Mayaruna people than would be possible by more conventional theatre means.  The play is truly “theatre of the mind” in a more intensive way than traditional radio drama or audiobook performance offers.  Humans create internal narratives of their thoughts and experiences and this format placed the audience in the internal narratives of McBurney and McIntyre along with other voices and a completely immersive natural environment.  It is really something that needs to be experienced and that cannot be fully conveyed in this post.

Readers who want to experience binaural sound can find true binaural files on the internet.  The advantage to the listener is that all one needs to hear binaural sound is a player and a good headset or pair of ear buds.  The sonic accuracy will sound amazing to someone only used to stereo.  But remember, this sound is for headsets only unless one owns a set of crosstalk-cancelled speakers and the encoder needed for that technology to work.

The Encounter was developed over a five year period of workshops and previews.  It takes sound design for theatre to a new level.  In fact, the play really is sound design.  Though there is a small amount of stage movement and some projected effects, 95% of the show is the sound.  A blind person could experience it as well as a sighted person.

The play has ended its 16-week run on Broadway in New York City, but may be performed in other cities.  I would hope that after the play has had its theatrical performances, it would be released as binaural sound files so one could enjoy it on one’s personal audio player.  But I have no idea whether that will happen or not.

Meanwhile, I hope the reader will explore other binaural sound files from the internet, read more about the fascinating Mayaruna people, and even read McLuhan, Carpenter, Ong, et. al. discussing the way oral cultures perceive time and space. The Encounter brings history and theory to life in a most engaging way.

« LISTEN TO THE DATA
BLIND AUDIO »