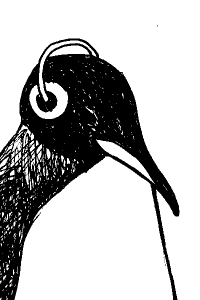 In this post I want to talk about a huge growth area in the field of audio: podcasts.  This is a huge topic so I will start with what will ultimately become a series of articles.

Podcasts can, in a sense, be considered a new kind of radio.  Before the introduction of television people would sit in front of a radio and listen to a program, anywhere from 15 minutes in length to well over an hour, just as people watch television today.  But television changed the role of radio and m uch of it gradually became a music and news service that is on in a home or workplace, but is usually in the background.  This is perhaps less true of talk programming on the radio, but even then I expect people are “multitasking” while listening – doing something else that may distract one’s full attention.

The real change in radio listening came with the introduction of the personal music player coupled with the rise of the internet.  When one has headphones or earbuds on, fewer external sounds distract and the audio seems almost to come from inside one’s head. A digital audio player that can load programs and music from the internet is also much more flexible than a cassette tape player or CD player which requires the user to carry around tapes and discs which usually only contain 60-90 minutes worth of content.

The digital player can store hours of material, music or talk, for the listener to tune into on their own time.  Before digital music players came on the market  there were, and are, pocket radio receivers with earbuds, but with radio you have to tune in to a program at a specific time and reception, according to where you are, can be uncertain.

The concept of the podcast, which didn’t exist until the early 2000s, is that one can download, from the internet, a radio program to listen to on one’s own time.  And since someone might want to tune into the same radio program each week over the air, the podcast has the added benefit that one can often subscribe to a podcast series and new episodes of the program will automatically be added to one’s playlist on say, iTunes, or even sent directly to one’s smartphone when they become available. Podcasts are radio programs geared to the time structure of the listener, not to that of a station program director.

Before the advent of the internet someone wishing to write a print article would need to find a publication to print it, unless they had the means to publish printed material on their own.  An internet blog gives the writer a chance to publish content on his/her own.  The podcast gives the same advantage to someone wishing to create audio content without having to find a radio station to air it.

So who should create a podcast? If you want to appeal to a broad audience you should focus on having some kind of story to tell, either by yourself or with others (as in interviews, audio dramas, documentary audio, etc.)

In the very early days of experimental radio (1920s) often an experimental radio “station” consisted of little more than an engineer/announcer in a makeshift room.  Programming was primitive but there were not many people with receivers, at first, to even listen.

The early days of podcasting were similar.  Often a computer “geek” would obtain the software (for what is called “RSS” (Really Simple Syndication)  distribution to subscribers) and create simple, often crude, podcasts.  Some were little more than personal rants on favorite music, films, some technical computer stuff, etc.  Some of this was crude but, like early radio, there were not, at first, many listeners with the RSS client software to receive podcasts.

I don’t want to demean a podcast that consists of a single person talking for a half hour or more at a time.  There are people who can hold an audience by simply reading or speaking into a microphone.  The late Spalding Gray could hold an audience in a theatre by sitting at a desk for 90 minutes and reading his interesting personal memoir into a microphone.  There are experts in certain fields who can hold an audience interested in their field by their gift of lecturing (like some gifted professors).  The podcast The History of England, is voiced by David Crowther who calls himself “a bloke in a shed,” yet he has many followers because he can really tell the story of England’s history in a gripping and informed way.  A friend of mine is similarly addicted to a podcast about the history of the English language, again told by a single very knowledgeable person speaking into a microphone.

But before you simply grab a mic and start talking, think about whether you actually have something to say that would attract followers.  Your limited personal opinions about bands, movies and politics may not be that unless you are truly gifted in how you present them.  The controversial views of, say, Rush Limbaugh, are certainly held also by many ordinary people, but he has combined the right elements of speech communication to make his program engaging to millions of listeners, even though many other millions violently disagree.  But having very strong lovers and haters of your work does show a certain skill at communication.  Most people expressing their political views in a monologue would come off as boring to both people who agree and disagree.

WELCOME TO THE 21ST CENTURY 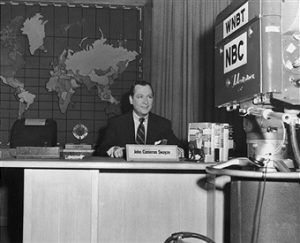 Take a look at the picture to the left.  It is the set of a major NBC national news broadcast, one featuring John Cameron Swayze that was a big hit in the 1950s.  Notice how simple it is.  Compare that to the set of the current NBC nightly (network) news (below).  TV has come a long way. 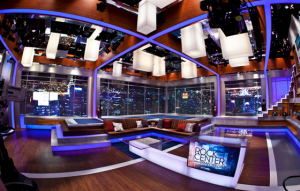 Podcasting has followed a similar trajectory. Many of todays highly followed podcasts are produced by major radio networks or national radio “stars.”  I listen to a great many podcasts but at least half are produced by the BBC (often radio programs that are made available as podcasts after they air on one of the BBC’s many radio services).  Others come from America’s National Public Radio (NPR) or from producers and hosts who also are on NPR or who have been successful on NPR.  These are rarely “a bloke in a shed” and have high production values, good hosts and interesting guests.  In short, they have a story to tell.

One radio, now podcast-only, producer, is Alex Alex Blumberg who used to be a producer on “This American Life” and “Planet Money,” both highly successful NPR stations.  He now produces his own podcasts that are not broadcast on NPR.  For someone interested in how to tell stories through podcasts I can recommend his CreativeLive course “Power Your Podcast with Storytelling.”  It is inexpensive and it consists of a series of live instructional lessons he did for student signed up for his workshop.

Before I retired in August of 2016 I used to teach media writing, even online, through the State University of New York. Having worked professionally in advertising I learned that effective radio communication is based on telling engaging stories. The Blumberg course emphasizes this for people who want to learn that art, and includes invaluable procedures for doing interviews that bring out a hidden story in someone.  I used to use similar techniques with my students not only for ads, but also for engaging oral histories.  Almost everyone has at least one great story to tell and my students found some very interesting people to record.

The Blumberg course does not go into the technical aspects of podcasting, the best environment, equipment, post-production software. This post also does not go into that.  BUT it will be the topic of a future post, so stay tuned.

I hear people talk today about “podcasts” and also about “streaming audio.”  Sometimes there is confusion about the difference since both consist of audio programming.

A podcast is a pre-recorded program which can be downloaded from a server.  If one subscribes to a podcast series it is possible to use RSS to automatically deliver the file to your phone, music player, or computer.  But if one doesn’t want a whole series, one can easily download a single podcast program.  Assuming one has a high speed broadband internet connection, a long program — say 30 minutes — can usually be downloaded in just a minute or two (depending on the audio format and your actual internet speed).  The downloaded program can be listened to at any time and saved for future use, as well.

Streaming Audio is the process of listening to a program over the internet in real time.  The program does not have to have been pre-recorded.  Many radio stations stream their entire programming continuously.  Even though I live about 65 miles north of New York City, my wi-fi clock radio awakens me to the live stream of WNYC radio in NYC.  Sometimes radio stations or networks allow one to listen to the stream later and keep them up for a period of time.  But unlike podcasts, listening to a stream will still be a real time experience.  A half hour program will take a half hour to stream though you can also listen to it as it streams. Streaming audio has allowed for the creation of internet-only radio stations.  For example, in addition to the BBC talk radio channel, BBC-Radio 4, there is an internet-only channel, BBC-Radio 4 Extra, which rebroadcasts popular older content.  There are now quite a few internet-only stations as people are discovering streaming audio.

Can one save streaming content?  There are programs for both Macintosh and Windows which let you record any sound that goes to your computer sound card.  I have used Audio Hijack and Piezo on the Mac and Total Recorder on a Windows PC.  In streaming mode a half hour program still takes a half hour to listen to and record, but then you can save the program for future listening.

I usually use wi-fi radios for listening to streaming audio.  These are like table model radios but they use the internet (using your wi-fi connection) to tune streaming stations from around the world (at least 20,000 stations currently available and counting).  One of radios, a high end Sangean, even has a USB port on the front.  I keep a USB flash drive in it all of the time and if I suddenly realize a program will be starting that I want to save, I only need to hit the “record” button on the radio to save the audio as it streams.  A real convenience.

For those interested in creating podcasts, I will do a future post about the equipment needed.  In the meanwhile I suggest you listen to some podcasts to get a feel for the field.  If you find some really engaging podcasts feel free to use the comment feature to share your find with others.

« HEADPHONE MADNESS
NEWS: Look for us on social media »